Active Citizenship | Ecosystem Building | Aug 17, 2022
By Natasha Joshi | For NGOs, impact comes in different forms and to track the cycles of social change work, we must think across the tangibility and the speed of emergence of change. 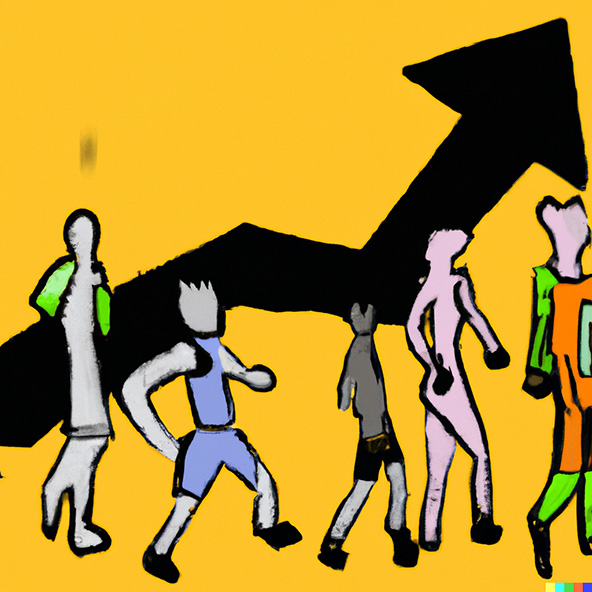 A few months back, we received an internal letter from the founder of an NGO, reflecting on the relationship between funders and founders in the development sector. An anecdote about impact leaped out, in which the community was asked what had changed as a result of the organization’s intervention. The founder had expected the community to talk about the NGO’s flagship program—targeted at improving livelihoods and income—but in village after village, the community partners explained that, “The fear has gone. We are no longer afraid.”

The story provoked us to consider what assumptions might be constraining how we think about impact. Compared with domains like manufacturing, in which the relationship between inputs and outputs is relatively direct and causal, ascertaining the impact of social programs is tricky (which makes it all the more important to learn from our partners). After all, societal problems exist within systems, which are not static but inherently reflexive: The very act of intervention changes the system, which, in turn, requires interventions to change. However, development sector measurement and evaluation approaches often don’t reflect this reality: Most often evaluations are sequenced to come in at the end of a program, as opposed to evolving with the program. Implementation to evaluation is usually a straight line, while social change work goes in cycles. And evaluations typically focus on metrics without fully appreciating the second or third order effects a change in those metrics might have on adjacent variables.

This is why traditional evaluation (in which expert judges determine the value of an intervention) is giving way—as Emily Gates described at a recent webinar hosted by CECAN—to a new thinking, in which the evaluator is a co-learner who is developing value. As Rohini Nilekani Philanthropies (RNP) has gotten more interested in trying to best understand and articulate the impact (and learning) of all our grants, we started asking our partners to share how they see the impact of their work. How did they think a philanthropy should judge its own performance?

Our partners work in many different fields—climate action, biodiversity and conservation, gender, civic engagement, justice, media, and youth engagement among others—and across rural, urban, and tribal geographies, with annual operating budgets ranging from $50,000 to $10-15 million and with teams both lean and large. By taking feedback—via an online survey—from this broad range of organizations, we tried to get a comprehensive sense of what the sector as a whole thinks and needs.

When we started to analyze the impact data that around 80 organizations shared with us, we realized that in reporting results as “impact,” our partners were making a variety of unstated assumptions, as well as treating certain other things as axiomatic. To make sense of it all, we took a step back and broke down what lay underneath. After first reading and discussing all the feedback that came in—and writing a reflection note to get our own thoughts and reactions down—we worked to categorize our grantee processes, outputs, and outcomes by Engagement, Collaborations, Concrete Actions, and Policy Change, after which two broad axes began to emerge, as the framework below plots: 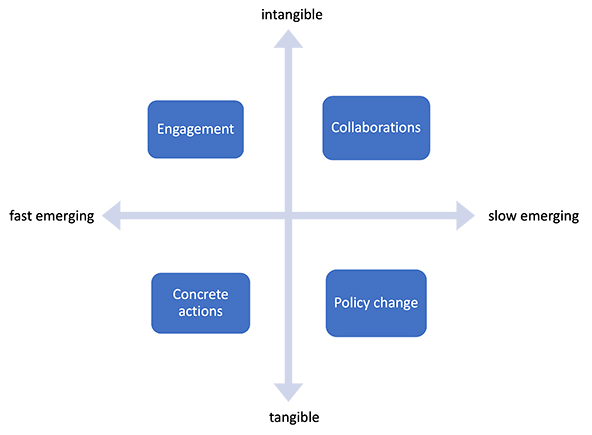 Impact is a spectrum: Along the Y-axis, efforts that result in clear policy change are considered tangible outcomes, while the ecosystem collaborations an NGO would forge—in order to get to the policy change—are taken to be intangible. By the same token, the X-axis plots the results reported by NGOs across a continuum of fast and slow emerging, from quick wins to, well, slower wins. Countable actions like vaccinations or children enrolled would be plotted under concrete actions, whereas any progress made towards shifting policies or increasing the network of actors that care about the NGO’s cause come under results that are slowly emerging.

What became clear from sorting through the data was that most organizations (if not all) operate in all four quadrants at once, and there is no hierarchy of actions or results. Concrete results are no less important or “strategic” than policy pushes: “Countable” results add tangible value to individuals who are being supported on the ground. Field actions also birth insight and innovation that eventually makes it to policy. In the same way, while engagement—under which we have results like “number of report downloads,” “number of website/video views,” and “frequency with which a network convenes”—can feel ephemeral, consistent engagement is a desirable fast emerging pre-requisite for longer-term deeper collaboration (which is plotted under slow emerging).

For example, one of our partners in the justice space undertakes concrete actions, providing free legal aid to children in conflict with the law. However, they also collaborate with network organizations that interface with children around other issues; they drive engagement around their work through a series of online and offline outreach events and collaterals (and by engaging volunteers); and, finally, owing to the trust, relationships, and insights built in the field, they are in a position to advocate for reforms to the Juvenile Justice Act (reforms that stand to impact many thousands of children).

Given the two axes exist as continuums, and an organization’s work slides up and down and side to side along these axes, it is centrally important to look at how metrics and indicators speak to one another across the breadth of the organization’s work, instead of focusing on a single isolated metric.

Across 80 organizations, certain points came up again and again, and as we sought to reimagine what makes for impactful action, we developed four broad ways forward that linked different forms of impact, which we mapped to the original impact quadrant. 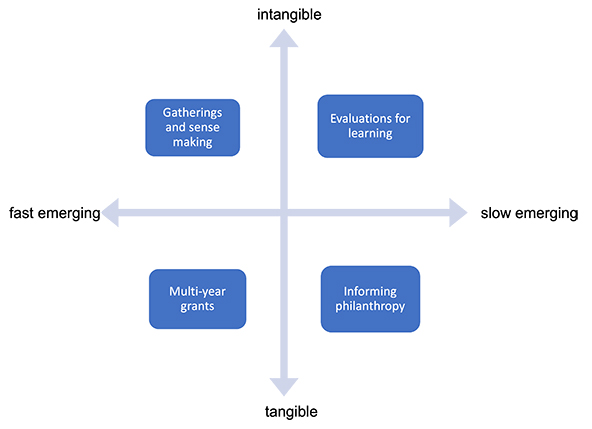 As we search for better ways of measuring progress, Fields of View—a Bangalore-based organization that makes systems thinking actionable through tools—shows what this can look like by distinguishing between “events” and “processes.” Events are similar to what we termed “concrete actions”: x children enrolled, y acres replanted, z ration kits distributed, and so on. Monitoring and evaluation has matured to the extent that it captures these indicators well. But it fails to account for the processes that bring people into these problems in the first place; if one can see the system better, so as to intervene at the level of process, we stand to change the trajectories of people and problems currently stuck in a loop.

By deploying a systems-conscious, multi-method approach when it comes to capturing and interpreting field dynamics, we stand to increase the resolution of the picture that emerges. This is not to say that doing it is simple, of course. Running evaluations for learning is indeed time-consuming and requires engagement and co-creation. But with emergent technologies, we can start to open up new ways of sensing. Having better sensing tools for impact also allows funders to fund more as this approach reveals many more spaces that require support and funding. Fields of View put it well: “[As] most donors would say, thirty years later we don’t want to be funding the same thing.”

Private Resources and the Public Interest: How can Philanthropy Enhance Social Good?

This is an edited version of Rohini Nilekani’s talk on how philanthropy can enhance social good given at CSDS, New Delhi. According to Credit Suisse, India’s richest 1% own 58% of the country’s wealth. Structural inequity is historically embedded in India, but it seems to be worsening. With this in mind, what is the public […]
Feb 21, 2018 | Speech

Citizens now have more opportunities to take active part in building urban resilience This year, I have been from Bengaluru to Kabini and back several times. Every time I return from the forest and the rural countryside, my eyes and senses hit refresh, and I see my home city with a new perspective. The overwhelming […]
Dec 2, 2020 |

Democracy’s Handmaiden: Humour. In today’s India, we need more of a funny bone in our public life

In these dark times, there is no harm in easing up with some sharp humour. Like the coronavirus, humour is infectious, but can spread much needed joy. The world over, social media is lighting up with witty memes around the pandemic. Bumbling politicians have been prime targets, and especially President Donald Trump. “Calm down, everyone,” […]
Jul 11, 2020 |