Interview: What Shall We Do With All This Money?

This is an edited version of Rohini Nilekani’s interview with Jayesh A Parekh, from a chapter in his book, What Shall We Do With All This Money? – Inspiring perspectives on Wealth 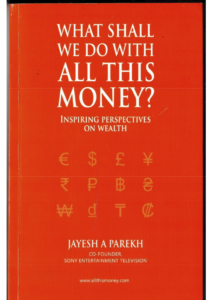 As someone who grew up in a normal, middle-class family, my parents instilled in us values about wealth that prioritised giving rather than consuming it. My maternal grandfather was known for setting up colleges and giving to various institutions. My paternal grandfather didn’t have much wealth, partly because as a lawyer he was less interested in making money than settling disputes out of court. He was part of the first batch that responded to Mahatma Gandhi’s call for volunteers in Champaran in 1917. His name was Sadashiv Soman, and he is mentioned in Gandhi’s autobiography. He helped set up Gandhiji’s first ashram in Bhitiharwa, and stayed there for months along with Kasturba Gandhi, helping the locals with education and sanitation. So that was the kind of legacy we grew up with. We understood that there was a societal responsibility that we all carry.

After I did my postgraduate diploma in Mass Communications at St. Xavier’s College, I became a journalist. At the beginning of my career, I was writing for Bombay Magazine and then freelancing for India Today and other publications. I had joined Sunday Magazine, but then took a break when the kids came along. In our urban middle-class life, we had enough money for everything that we needed. We were focused more on what we wanted to do with our lives. My mother encouraged all her daughters to be ambitious, study well, and plan for a career even though she could not have one herself. She was a teacher and took tuitions from home, and she was always creatively and productively engaged and encouraged us to do the same. She had a keen interest in politics as well. But in terms of money, we never really compared ourselves to others. Personally, I think that was because of the relatively good public infrastructure in Mumbai. We had good learning institutions, public transport, spaces for art and culture, and safe public spaces. All of that reduced the need for extra disposable income.

In 1981, when Infosys was set up by my husband and others, we had just gotten married. We were young and could afford to take a risk, so they started Infosys and I invested Rs.10,000 in the company — money that I had partly saved and partly been given by my parents. Since Infosys became so phenomenally successful, I became wealthy alongside Nandan as well as independently of him. Nandan often says, “I am an accidental entrepreneur.” Similarly, I then became an accidental philanthropist.

It took me a while to get used to this kind of wealth, coming from the background that I did. I was always left-leaning on the political spectrum, so I was a little suspicious of the wealthy as I grew up. It took me a while to get used to my own wealth, but then I realised that wealth can be an opportunity to achieve the goals that I had always dreamt of. I always wanted to live in a society that looked out for its weakest members and realised that wealth could be one vector to make that happen. Once I dealt with that, we began to use our wealth for larger societal gain. I started making small grants and later much more strategic grants. This culminated in our joining The Giving Pledge, where we have pledged to give away at least half our wealth. It was set up by Bill and Melinda Gates and Warren Buffet. The idea is that there is an accumulation of extreme wealth in the hands of very few people, and so they encourage people to make a pledge. The money can be given anywhere by the people who commit to it, as long as people accept the responsibility of wealth to create societal benefit.

I have also been a serial social entrepreneur. I co-founded Pratham Books where I wanted to help democratise the joy of reading to millions of children. From 2004-2014, I served as the founder-chairperson of Pratham Books and we reached millions of kids with local, indigenised content in multiple languages at an affordable price. With a personal endowment, I aso set up Arghyam, which means ‘offering’ in Sanskrit. In 2005, Arghyam started focussing on the water sector. Over the years, we have supported nonprofits around the country in participatory groundwater management. India is facing a serious water crisis and I hope that Arghyam has been able to positively influence the sector. Apart from this, Nandan and I, along with Shankar Maruwada, have set up the EkStep Foundation in 2014, where we are working in the education sector with the goal of enabling access to learning opportunities for 200 million children. We are using technology as the backbone to achieve that. I also support work in various areas such as environment, governance, independent media, justice, and gender.

My philosophy has always been that, in the continuum of Samaaj, Bazaar, and Sarkaar (Society, Markets, and the State), we need to ensure a strong Samaaj. Markets and the state are meant to serve society, not dominate it. My focus is entirely on the Samaaj sector. I believe that we are not just consumers for the market, nor are we simply subjects for the state. We are citizens in our own rights, we co-create good markets, and we must co-create good governance. In all the work I do and institutions that I give to, I try to support ideas, individuals, and institutions that help build up civic capacity in the Samaaj space. We need moral leadership, institutions, and grassroots work. We need to build strong societies to keep the market and state accountable for the larger public good. That has been my philosophy for work and giving.

This journey has been exhilarating and humbling. We have such a vibrant and innovative civil society in India, though it is renewing itself now and is also under much pressure. In whichever sector that I choose, I identify people with high integrity, commitment, and a long-term perseverance to achieve the goals that they have chosen. Outcomes are difficult to measure and achieve, but I am okay with it as long as we are headed in the right direction. I understand that we will occasionally fail, and that philanthropy is extreme risk capital. We are investing where markets won’t and the state can’t. For example, through Arghyam we have made a significant impact on the ground, creating lots of communities that are managing their water more sustainably. We have achieved tremendous policy impact over the years. But we also try to be patient and work alongside our partners. Sometimes donors can be very unreasonable in the impact that they want to achieve, and I try not to be like that. I try to build a relationship of trust.

Both Nandan and I want to create a large impact through building public institutions. India still needs to build out its intellectual infrastructure. To that end, we support several institutions of learning and research in the social sector. We have supported the Indian Institute for Human Settlements (IIHS), which is building out professional capacity to nurture an urbanising India. We have also supported Bangalore International Centre (BIC), which is a hub where people can come and learn from each other. I also support the Vidhi Centre for Legal Policy. Well run public institutions are a strategic and long-term way to develop wealth. Some of these institutions do a lot of evidence-based research for policy advocacy, so that of course impacts millions of lives because good policy and good laws make a huge difference to society. I think that’s the forward impact of giving wealth away wisely.

We live in times of extreme inequality. I don’t think it’s healthy for any country or society to have so much disparity. India and the US are outliers in this, and the pattern of extreme inequality means that very few people control a lot of wealth, have garnered tremendous resources, and consequently power. Today’s technologies enable even more of that and the way markets are structured allows continual accumulation of wealth by the wealthy. That’s not good for societies, for justice, or for future generations. I try to look at wealth in this context, and understand the distortions of power that can creep in from our ability to give. That is why I try to create a lot of voice and diversity in my philanthropy portfolio.

In terms of our wealth, we spend on travel and health care. We have already given our children what we think is their rightful share of our wealth. Since we have made The Giving Pledge, we have to focus a lot on our philanthropy and it is going to be a tremendous uphill task to give that wealth away in our lifetime. It is not easy to give so much money in a meaningful and effective manner. It takes a lot of hard work.

When I think about the next generation, I believe they’ll see a lot of upheaval in their lifetime especially because of climate change. I would ask them not to focus on money, and to stay curious, connected, and committed as citizens. That is how lives become meaningful, not through wealth. Research shows us that wealth does not necessarily produce happiness, but rather it’s how you deal with the wealth that would ensure that. We need millennials to practice empathy. We get wealthy due to accidents of fate, but our fate remains intertwined with the rest of humanity. When we understand how interconnected we all are and internalise this, our monetary situation becomes a creative opportunity.

Are we suffering from a lack of imagination?

The pace at which social problems are outpacing our solutions underscores the need for bold philanthropy, audacious goals and capable, committed leadership in social sector organisations, says Rohini Nilekani, founder-chairperson of Arghyam and co-founder of EkStep.   How do you think Indian philanthropy has evolved over the years?  How have the approaches and discussions around […]
Dec 18, 2018 | Interview

Rohini’s speech at the TiE Summit 2020 where she talks about Societal Platform Thinking, and the need for restoring agency to create a more resilient Samaaj.     Namaste, everyone. Thank you to the TiE team for inviting me to deliver this keynote. TiE does amazing work at binding the energy of entrepreneurship to the […]
Dec 8, 2020 |

Rohini Nilekani, author of Uncommon Ground, with Infosys founder NR Narayana Murthy and Sudha Murty at the launch of the book in Bangalore on Thursday. View PDF
Oct 14, 2011 | Event

Nilekanis donate half of wealth to philanthropy

Infosys co-founder and Non-Executive Chairman Nandan Nilekani and his wife Rohini Nilekani have pledged to donate half of their wealth to philanthropy. The Nilekanis had announced their decision to donate their wealth through a letter on November 8 that was put up on the website of ‘The Giving Pledge’. The Giving Pledge is a campaign […]
Nov 21, 2017 | Personality
Back to the top