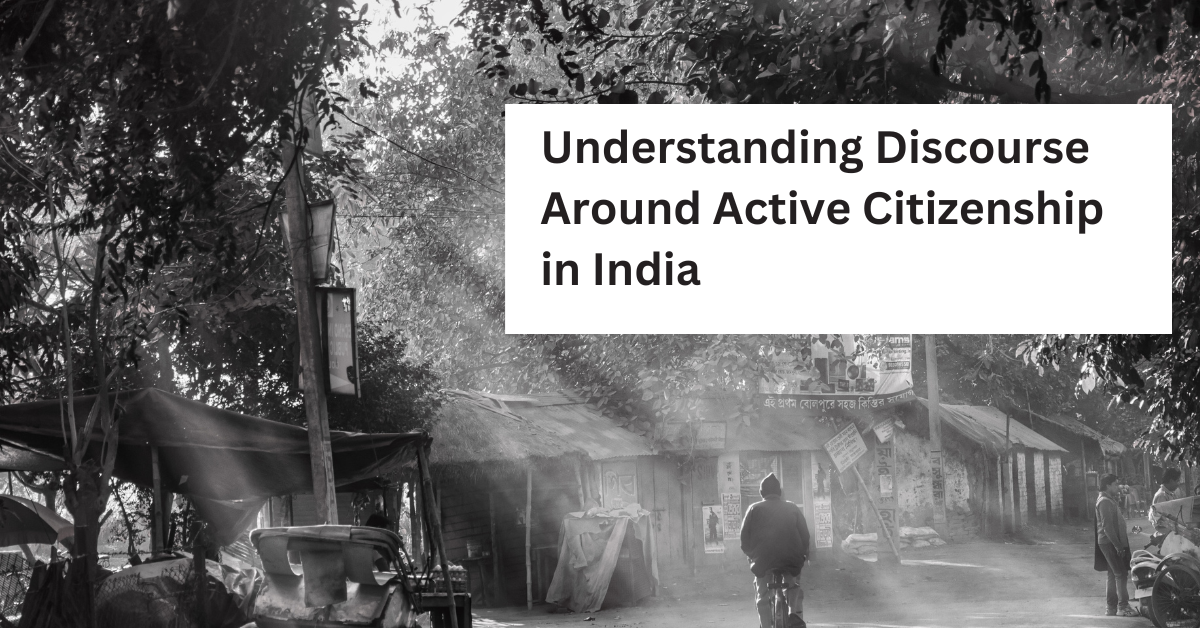 “Citizenship” is most commonly associated with electoral participation, tax jurisdictions, and travel visas. However, citizenship and civic identity is a much deeper experience, where members of society exercise voice, agency and rights in myriad ways to affect change in their localities, cities, States and, indeed, the nation.

Citizens observe things in their neighbourhood that need improvement and often participate/volunteer to make those improvements. Citizens keep track of the promises made to them by their elected representatives and interact with local government to claim their benefits and entitlements. Citizens are employed in civil society organisations where they work alongside the government to help other citizens that are vulnerable or marginalised. And very often, samaaj (which is a collection of citizens) becomes the greatest ally of sarkaar and bazaar as it takes up services from the two and provides dynamic feedback on what is working and what is not.

In order to understand how these identities are expressed in both offline and online spaces, Rohini Nilekani Philanthropies, in collaboration with Porticus Foundation, supported a digital ecosystem analysis conducted by QUILT.ai.

The objective of the analysis was to arrive at a clearer picture of how multiple types of civic identities are expressed online – what kind of volunteering opportunities do people look for (online) and how? how do citizens covey their demands at elected representatives or express satisfaction related to civic issues in their locality? How does government communicate with citizens through online platforms, and what issues get the best traction? What are some demographic trends when it comes to civic engagement online?

This report captures the results of some of these queries and improves the resolution of the current image of active citizenship and civic engagement in India.

Report | Why Philanthropy Must Support Crowdfunding in India

Since the beginning of this decade, crowdfunding has enabled an ever-growing number of projects, from films to products to charitable work, to be successfully funded through online platforms. The proliferation of crowdfunding platforms in India that enable individuals and groups to seek funds for non-profit and charitable causes, is an indication that the public is […]
Nov 1, 2017 | Reports

To fail is to have dared | IDR Failure Files

Philanthropist, author, and former journalist Rohini Nilekani speaks to India Development Review (IDR) co-founder and CEO, Smarinita Shetty, on why failure needs to be underwritten in the social sector, and how philanthropists must develop more patience and create a space that normalises failure in the context of nonprofit work. You can listen to the full […]
Oct 15, 2021 |

Sometimes, it seems as though much of the world is trying to crowd into Bangalore. Hold that thought. At almost seven million, our population in this city is already more than the population of new-age countries such as Ireland, and almost half of that of Chile. View PDF
Sep 23, 2005 | Article

Bengaluru Launches 4th Edition of Joy of Giving Week – India’s Largest Philanthropic Campaign! The Joy of Giving Week, a “festival of giving” is being organized across India from October 2nd to 8th, commencing on Gandhi Jayanti. View PDF
Sep 11, 2012 | Article
Back to the top